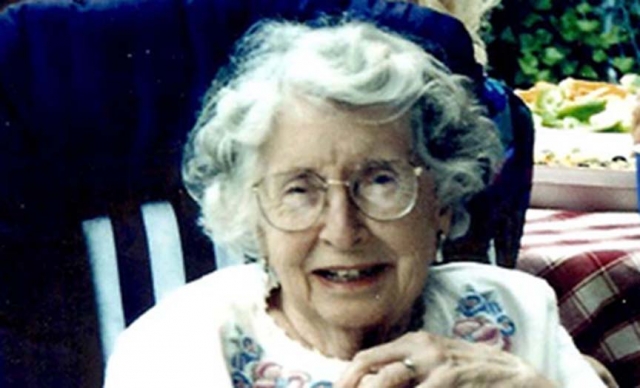 I’m writing this post about my grandma, Katherine Gibson. My dad’s mom. She died ten years ago December 6th. Does everyone say this? I can’t believe it’s been ten years.

Let me tell you about Grandma Gibson.

I got tears in my eyes saying those two words to myself, Grandma Gibson. They mean loving, generous, sweet Grandma. I got to know her for 32 years. How lucky am I? And that’s not something I utter often but I’ll keep it here.

Growing up we spent a lot of time at Grandma’s house which is actually a big farmhouse that’s been in the family over a hundred years! It was like a second home to my brother and me. Our family even lived there for a while after returning from my dad’s post-graduate work in Korea. We spent lots if not most of our weekends and school breaks there. 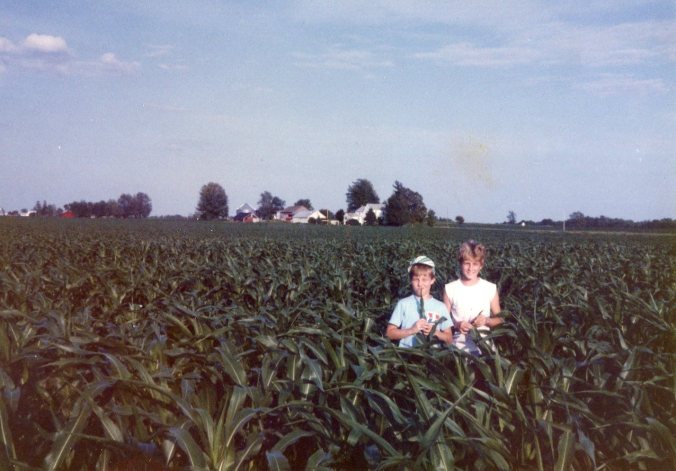 Andy and Jenny; The Farm in the background

Grandma was the Ultimate Homemaker. She quilted, crocheted, knitted, cross-stitched, and had a green thumb. She made the most delicious food you can imagine. She baked her own bread. I can see the loaves left to rise on the window sill, and conjure the smell of bread baking now. We asked for the crusts—just out of the oven, piping hot, real butter melting. I try to replicate her roasts. Forget it, I’ll never get mine so fall-apart-on-your-fork tender. And her gravy? We sopped up every flavorful drop with our bread. And do you know who she was cooking for? Us kids. Sometimes my dad and other family were there for these incredible meals. But she spared no effort, detail, or time, when it was just us kids.

We’d make pizza on weekends. And watch The Dukes of Hazzard. And she would always, always, always have chocolate almond ice cream.

Sometimes we were little stinkers for Grandma. Probably because she was so nice and we could get away with it.

I just about spit out my coffee remembering this one:

My dad, who lived in New Jersey much of our childhood, would fly Grandma out with us on school breaks. She watched us while he worked. One day my brother and I decided to hide. I mean, really hide. Quietly… while she searched and searched… calling our names… and everything. We were under the kitchen sink. I think we emerged at the point she started to cry. I must be a really mean person because I’m still giggling. I suppose hiding was better than another favorite: jumping out at her from behind a corner. Sorry, Grandma!

When I was really little I remember sleeping in Grandma’s bed. Her purple striped sheets were so worn that they almost felt like satin. In that big dark farm house at night I felt safe next to Grandma. And I would wake to the sizzle and smell of sausage. No Poptarts or frozen waffles at Grandma’s, no sir!

Grandma was of the generation of “pressing.” She had an ironing board that folded down from the wall in the kitchen. Though I wasn’t around to see it, she pressed cloth diapers. I did see her press bed sheets and t-shirts. When I fling my comforter over my pillows in one quick motion (in other words, make my bed), I think of how my Grandma taught me hospital corners. Like I said, Grandma was the Ultimate Homemaker.

She was born in 1910 and she’s my marker of history. For example, when I hear accounts of the attack on Pearl Harbor, or think about World War II I think, Grandma would have been in her thirties. When I recently watched the Ken Burns documentary on the Roosevelts, I wished so badly she was around to share her memories and opinions. I do remember her speaking fondly of Eleanor.

Grandma center. I absolutely love this picture of her and her besties. Not so different from today…

Though I knew my Grandma for 32 years, I never knew my Grandpa, Don. He died of a heart attack when he was only 44, and my dad, only 12. I have heard what a wonderful husband and dad he was. I’ll never forget Grandma telling me they were crazy about each other. And what a handsome man he was!

Do you want to hear something terribly ironic? Ironic isn’t exactly the word. Coincidental? Crazy? Bizarre? My grandpa survived his two brothers who died as teenagers: John, sixteen, of appendicitis and Forrest, the same age as Kade, nineteen, of diabetes.

I won’t dwell on Grandma’s later years where, sadly, her health declined after strokes. But I will share that when she didn’t say much of anything at all, when Kade would walk through the door, she would light up and exclaim, Kade! And they’d cozy up for a ride in her pink automatic recliner lift chair.

I wonder, when Kade got to heaven, if he was welcomed like that.

Kade and his Great Grandma Gibson. He looks like he was maybe four.